Integrating with an Exchange

This document is intended to guide developers through the integration of the XEM token into an Exchange platform. It contains recommendations on how to set up accounts, listen for deposits, and create withdrawals as well as links to the REST API endpoints that should be used.

There are many ways to design an exchange. This guide is based on how to support XEM deposits and withdrawals in an exchange that follows a central wallet approach.

Please note that this design is not particularly recommend over others. However, its simplified architecture is a good showcase for NEM’s set of features involved in integrating with an Exchange. A different approach, for example, would be to use a different wallet for each user.

The main components of this architecture are described next.

The exchange owns a NEM account where all the user’s deposits and withdrawals occur. The keys to this account need to be on an online machine, so this is also commonly called the Hot wallet. This account only has the necessary amount of XEM for daily use (withdrawals and deposits), since it is the account most exposed to attacks.

Cold wallet(s) hold a certain threshold for the pool of XEM. These accounts should be created and remain in a setup with no internet connection. Transactions issued from cold wallets must be signed offline and announced to the network using another device. It is advisable as well that cold wallets are set up with Multi-signature.

In the proposed architecture, each user is identified by a Unique User IDentifier (UUID) on the exchange’s database. A user will deposit to the central wallet with their UUID attached as the message of the transaction (called sometimes the memo). The UUID is only shown in the user’s dashboard during the deposit confirmation.

One of the drawbacks of this design is that many users are not used to having a message attached to their transactions. If they forget to attach the UUID or attach a wrong UUID, it will lead to receiving lots of support tickets concerning “lost funds”.

This machine is constantly listening for user’s withdraw requests, and monitors the blockchain to detect user deposits into the Exchange Central Wallet. As explained in the rest of this document, it maintains the database updated and announces any required transaction.

All the user’s funds are merged together in the Exchange’s wallets. This database keeps track of the amount of tokens each individual user holds. It also records all processed transactions, for record-keeping and to avoid processing the same transaction more than once.

Although not absolutely necessary, it is recommended that Exchanges deploy their own NEM node to communicate with the rest of the network. Since each node automatically connects to several other nodes on the network, this approach is more robust than accessing the network always through the same public node, which might become unavailable.

Also, by running your own, secure node, you can use the simplified REST API which takes care of signing transactions for you as explained below.

See the Node operation guides to learn how to deploy a node.

Nodes normally keep old transactions in memory so they can be queried by their hash, but only for 36h. If you need to retrieve older transactions you can configure your node with a longer retention time by adding these properties to the nis/config.properties file:

Use -1 to indicate that transactions should be kept in memory forever.

Note that this restriction only applies to retrieving transactions by their hash. All transactions are retrievable, for example, if you know the block where they were included (See the /block/at/public endpoint).

Exchanges can create the central and cold wallets by downloading the NanoWallet.

Every wallet has assigned an account (a deposit box that holds tokens, which can only be transferred with the appropriate private key).

Warning: The private key must be kept secret at all times and must not be shared. Losing the private key means losing access to an account’s funds, so make sure it is securely backed up.

The native currency of the NEM network is named XEM. The token is used to pay for transactions and service fees, which are used as well to provide an incentive for those participants who secure the network and run the infrastructure.

These are the properties of XEM:

This is a classic conflict in blockchain technology: On one hand, if transactions are accepted too quickly, they might need to be reverted later on in the event of a network fork. On the other hand, waiting for too long is inconvenient for users.

The standard procedure in most blockchains is to wait for a few blocks to be validated (added to the blockchain) before accepting a transaction.

The amount of blocks to wait for depends on the risk one wants to accept. The recommendation for NEM is 20 blocks (about 10 minutes).

An added problem caused by rollbacks is that transactions might expire in the process of resolving a network fork.

A bit of context is required here. Transactions are not allowed to remain unconfirmed in the network forever, as this would pose a significant strain on the network’s resources. Instead, all transactions have a deadline, and are automatically disposed of when the deadline arrives.

Users are free to use any deadline they want for their transactions within a 24h window after the transaction is submitted.

Transactions which are about to expire are delicate because, even if they get confirmed and are added to the blockchain, a rollback could send them back to the unconfirmed state and their deadline could expire before they are confirmed again.

Therefore, it is recommended that: 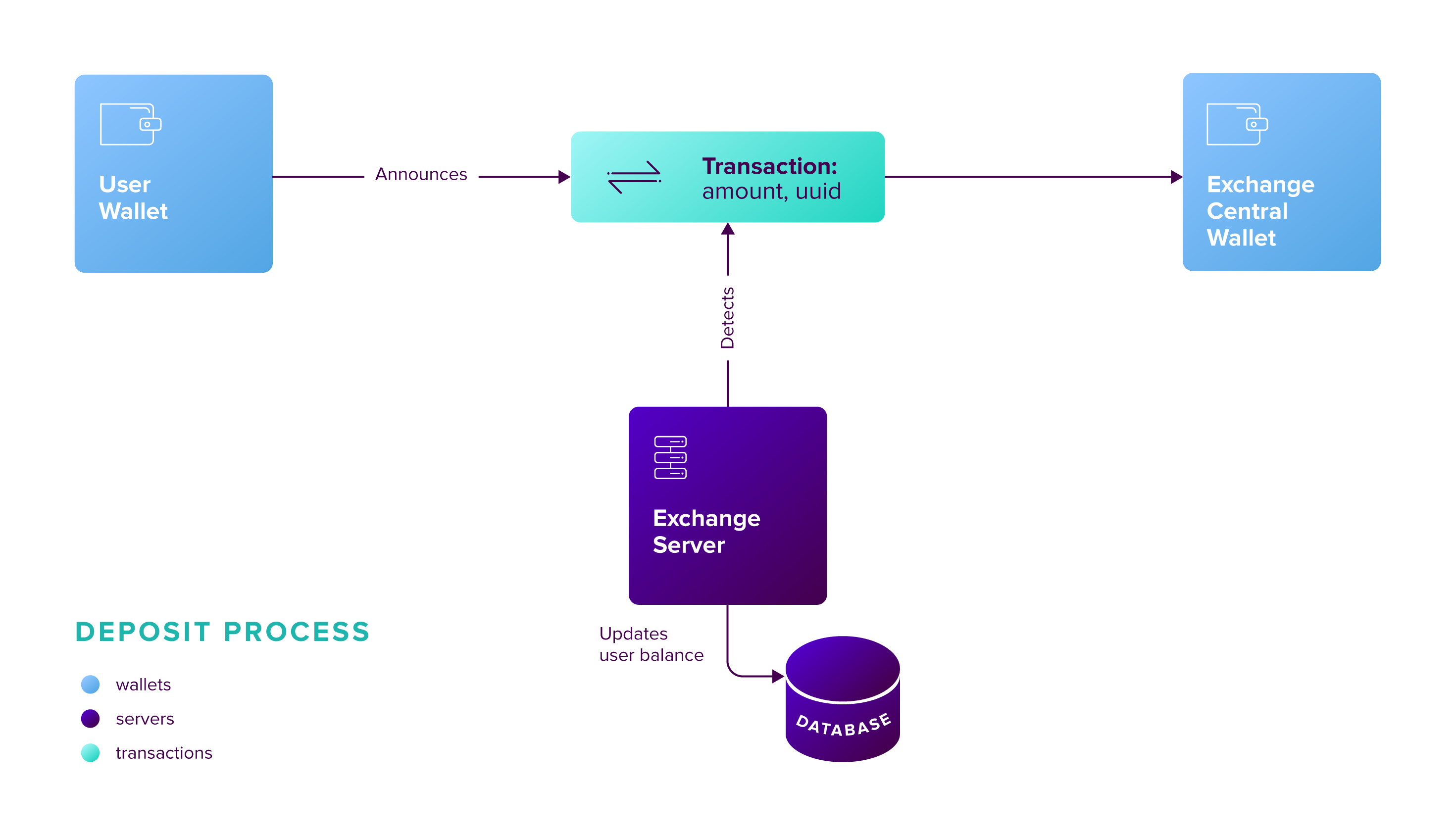 The mechanism proposed below addresses all these issues by monitoring incoming transactions: The blockchain is polled periodically and all relevant transactions since the last poll are processed in a batch:

Take a look at the transfer transaction examples page.

Users send withdrawal requests to the Exchange Server, via a web page or mobile app, for example. If the database indicates that the user has enough funds to perform the withdrawal, a transfer transaction is announced from the Exchange Central Wallet to the NEM address indicated in the request.

Announcing the transaction has a fee which is paid by the Exchange Central Wallet but can be deduced from the user’s account. Regardless of the token being transferred, fees are always paid in XEM tokens.

The withdrawal process requires two steps: First the transaction transferring the funds is announced and confirmed (added to the blockchain). Afterwards, the exchange needs to wait for 20 more blocks to be confirmed to reduce the risk of rollbacks.

Waiting for the transaction to be secure is performed in a manner very similar to how incoming deposits are monitored (see Monitoring deposits above): The blockchain is polled periodically and all transactions since the last check are processed in a batch, looking for outgoing transfers which happened enough blocks ago.

This process can obviously be performed in the same loop that monitors for incoming deposits.